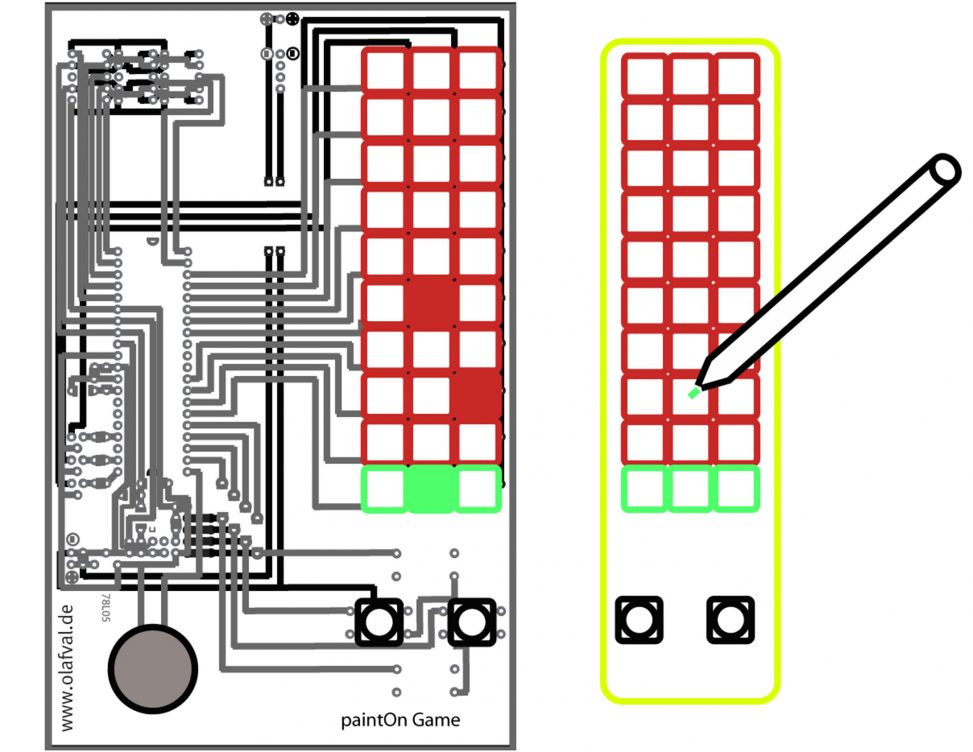 The idea how to play PaintOn Games is based on the first computer game in pocket size version; the „AutoRace“ of the company Mattel. This game shows, quite simply, that very little is needed to playfully entertain humans. Only a tiny keyboard, light diodes, two or three sound, connected to a programmed structure is needed.

In 1976, after a demonstration of the new LED technology, Michael Katz, marketing director of Mattel Toys, hit upon the idea to use it to create a calculator-size game. AutoRace was born. Players hat to steer a „car“, represented by a LED, avoiding collision with on-coming „traffic“. Like with Pong, the recipe of success was inspired simplicity. You only need ten seconds to learn the game, but hours to master it. (Electronicle Plastic, Editors: Die Gestalten, 2000, Page 8).

The adaptivity of the original game, on a clearly structured platine, contains no indication of the first motive of game of car-races. Instead, the cube-shaped LEDs are associated to children´s building blocks. To every game handicraft materials are set with the purpose to suggest a further designing of paintOn Games. Using plastic folio, self-painted game-motives can be pushed over the fluorescent fields in a pocket. Using styrofoam new games can be designed, by setting the fluorescent blocks into another constellation. The paintOn Games are designed as a educational way of playing and are used in this manner. In the context of art, the whole project is introduced by supplementing
documentation material of those actions.