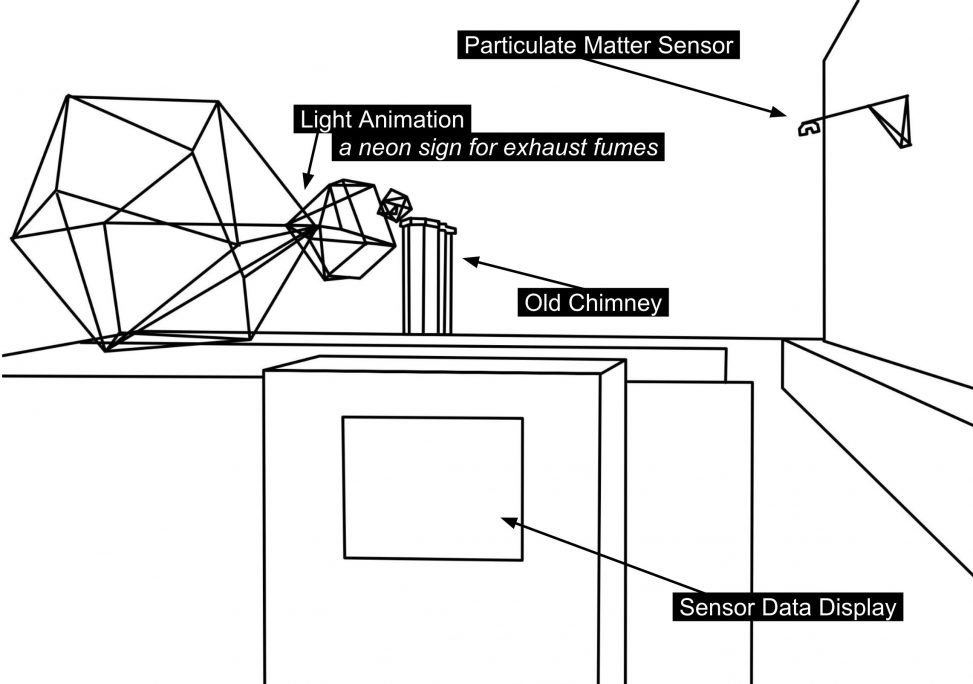 Smokestacks
Since the beginning of the industrial revolution, large factory chimneys have been an iconographic feature for this form of progress and at the same time for the associated problem of environmental pollution. The light installation PAR7ICLES is dedicated to these meanwhile mostly disused testimonies and remnants of a heavy industry in order to reinterpret them as a symbol for environmental protection and smart sustainable management.

Action at a distance
Viewed from a distance, the outlines of clouds of smoke can be observed as light animation, which seem to emerge from the chimney, only to be pushed straight down in the direction of the viewer by unfavorable winds. Technically, this installation, reminiscent of an old neon neon sign, is based on a frame made of bamboo sticks with LED strips. The parametric three-dimensional design of the smoke clouds gives the nostalgic chimney a futuristic design in reference to the polygonal structures known from computer games. Exhibition view
In the exhibition, the measurement of fine dust pollution is documented on site with self-made sensors. The recordings at the various measuring points of the entire period are played back in time-lapse on a screen. Video recordings that show the respective sensor in its environment provide intuitive access to the measured values, for example if the day-night cycle can be recognized or the different levels of traffic on a street can be observed, which affects the displayed fine dust values. The current value shown in the time gun display simultaneously triggers the intensity of the light animation on the chimney. In this way, in an aesthetically understandable way, the circle between the smallest fine dust particles and an overarching general awareness of supposedly invisible environmental pollution is closed.

Background
The PAR7ICLES project joins the www.sensor.community platform and uses its open source DIY instructions to build the sensors. It is a global crowd source sensor network operated exclusively by contributors that generates open data environmental data. The air data measured by the PAR7ICLES installation are therefore also incorporated into the sensor community project.

All building instructions, the program code and experience reports of the PAR7ICLES installation are published on my homepage under a free Creative Commons license, which invites you to recreate the project elsewhere.