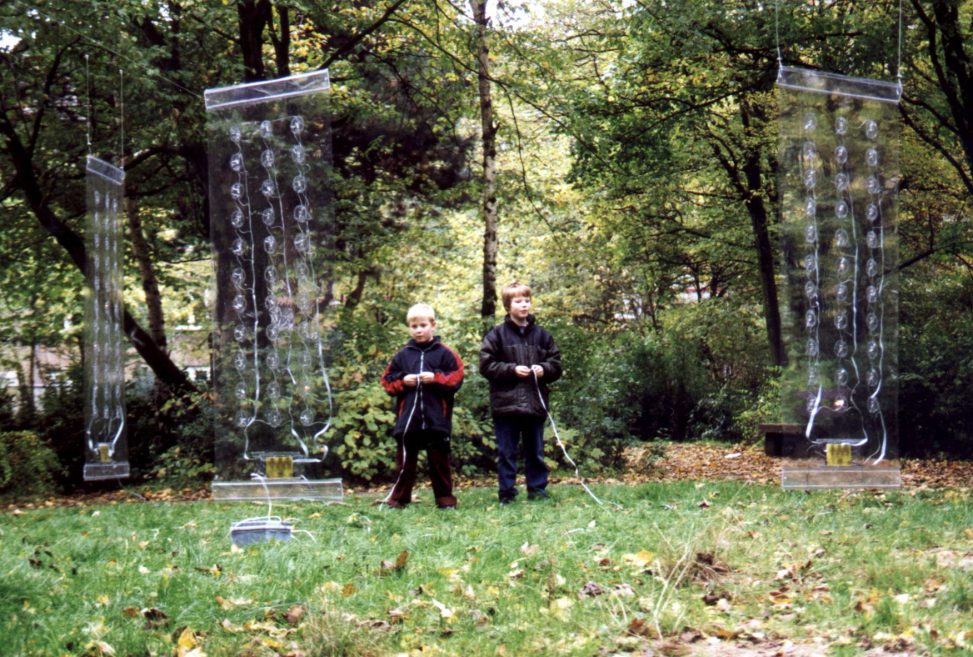 „SwingUp Games“ are designed to be easy to carry and easy to install even in public space. Game Art Graffiti!

Three plastic foils, which can variably be set up as transparent walls, are giving shape to these three computer games. By using the keyboard, the player may move the only point of light from right to left. Based on the principle of a moving light, weak points of light move up and down in the same vibrations on the three shrink-wrapped vertically set light chains. The goal of the game is to head for the vibrating lights as skillfully as one is able to, so that the bright points of light are pushed to the top. „swingUp Games“ are designed to be easy to carry and easy to install. These qualities allow many improvised „exhibitions“ at the most different places, also in public space. The „swingUp Games“ are also designed to catch attention and therefore to enhance communication between most different people. The film as a membrane of perception, a platform for the „antenna“ of structure, also enhancing stimulation and enticement of the wrappings of consumer products, as a over-rated reality. Moving from church windows to celluloid films to the overhead folio and portfolios, in future to handy held ebooks and folio-displays, provided by solar folios. The light is absorbed electrically, digitally, logically processed and passed on as a sign of light. In „SwingUp Games“ the foil itself, with its hand manufactured lips and welding seams, becomes a material object, at which dirt-pure sticks and drops from condensation are formed. Contents of the foil are minimized, so that the balance between „foil“ and „reality“ remains. The work reminds of the first video games in the pocket format, which came out in the 80ies, and could stay on the market as cheap products until today besides Game Boy and games for cell phones. In these games structure and motive for playing are usually connected directly to each other, by the appearance of the illuminations as images. While in „SwingUp Games“ the game structure is separated formally as abstract light play from the motive. Now this motive is formed by the environment, as background for the transparent games.