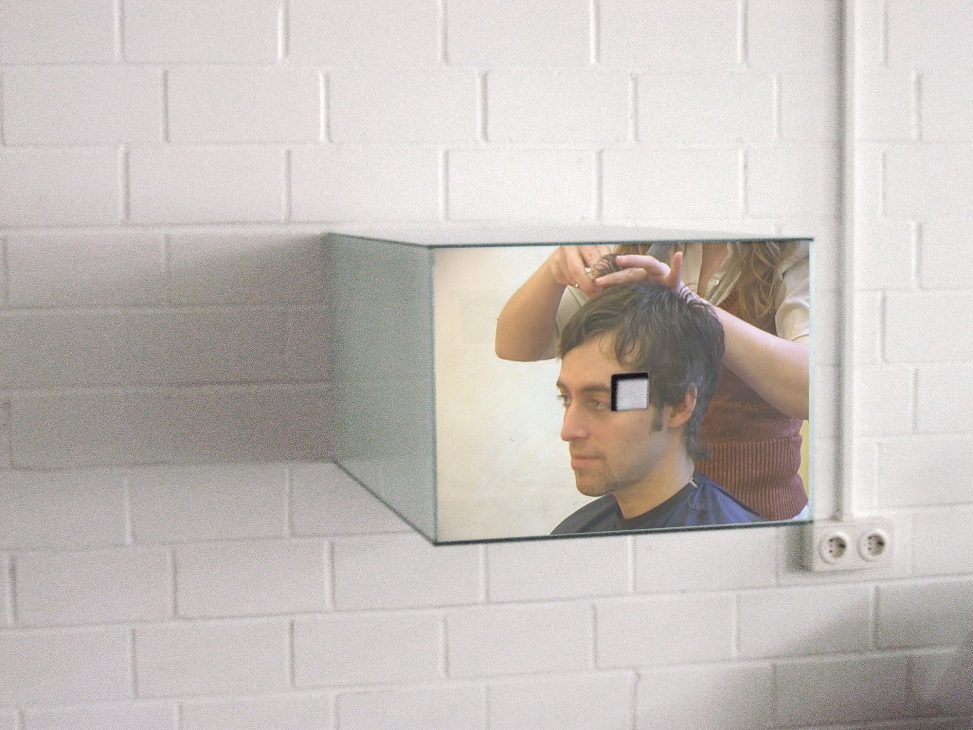 What ideas does the outer skin of an art work provoke in our technologized time, and what is hidden beneath the surface? Söke Dinkla

Visiting a hairdresser is an everyday activity with the aim of improving your individual appearance. Getting a haircut is a part of ouer culture. The videos played in “Impulsbild Friseur” (Impulse Image Hairdresser) show me, in the process of having my hair cut, revering to the ritualised process of washing, cutting, blow-drying and styling.

The video footage is split in four video sequences, three of which show the preparation and waiting. These sequences are played endless in the in the idle mode of the sculpture. A push-button in the middle of the video image invites the viewer to approach the sculpture and to activate it. If the button is pressed the fourth video sequence is played, in wich my hair is being cut. It is only through the interaction with the beholders that they can see how my appearance is changed. The viewer provides the “impulse” for a performative reception. The work poses the question: ‘When do I feel the impulse to press the button? At what point in time do I want to interrupt the endless loop, provoke a change?’

Nine years before the word “Selfie” became popular and two years before Youtube established the play button placed in the center of the picture, the sculpture “Impulse Image Hairdresser” investigated the genre of the self-portrait in the context of interactive electronic media. The invitation to interact with the work disrupts the viewing of the video images, as the push-button is mounted in the middle of the screen. The large flashing button is an important part of the video sculpture not only because of its function but also because of its physical presence. The self-portrait is not produced by finding certain images rather through the staging the simple interactive functionality as the central aspect. This shift from paying all the attention on the iconography to paying more and more attention on the interaction unmasks the self-portrait as a big desire for feedback.